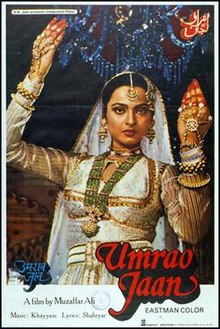 Umrao Jaan, a period film made in 1981 was directed by Muzaffar Ali and stars Rekha as a lead character and dancer. The film is based on an Urdu novel and is considered to be the best to understand the life of a courtesan in Lucknow of the period when art and culture was at its peak.

A three hour private film show will be followed by a high tea at The Tornos Studio.